This article was taken from Popular Mechanics

After an eternity of chatter and commercials, the radio DJ is about to play the song you’ve been waiting for. Then, after a moment of pregnant silence, you hear it. No, not your favorite tune, but your least favorite sound: a bzzt-baba-bzzt-baba-bzzzzzzzt that pierces through your car-stereo speakers. The jarring interruption is as familiar as it is mysterious. 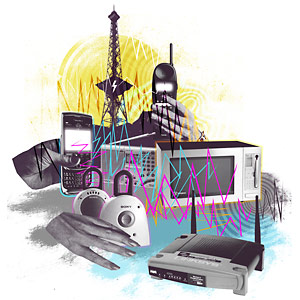 Within moments a cellphone will ring, either in the radio studio dozens of miles away, or inside your own vehicle. That’s because what you’ve just heard is the noisy pulse of a cellphone’s transmitter, amplified by either the station’s studio equipment or your car’s stereo. What you experienced, in other words, is radio-frequency interference, or RFI.

RFI takes many forms, and they’re all ugly: A humming microwave chokes a Wi-Fi connection; a baby monitor brims with noise; an audio recording made with a laptop fizzles and pops. RFI has been an irritant throughout mankind’s love affair with electronics, particularly with wireless gadgets. So what is it? How can you stop it?

Electromagnetic radiation lies behind everything from gamma rays to visible light to your kid’s walkie-talkie. We use only a portion of the spectrum for wireless communication, the broad swath from about 30 Hz to 300 GHz. (High-school physics refresher: Wavelengths get shorter as frequency gets higher, and a 1-GHz wave measures about 12 inches.) Range, antenna size and cost requirements conspire with stringent government regulations to relegate most personal electronics to an even narrower range of frequencies. This, a thin, patchy ­section of the electromagnetic spectrum below 5 GHz, is where our gadgets live. Cellphones, depending on the carrier, communicate at 850 MHz, 1.7 GHz and 1.9 GHz. Wireless home phones ­broadcast at 900 MHz, 1.9 GHz, 2.4 GHz and 5 GHz. FM radio spans from 87.5 MHz to 108 MHz. Many routers, along with all Bluetooth devices, transmit at 2.4 GHz. And with so many gadgets hanging around in such a narrow range of frequencies, things can get crowded. Signals can get crossed, literally.

“Consumer electronic devices are designed to be used in a certain environment and interact with electromagnetic fields,” says Carnegie Mellon electrical and computer engineering professor James Hoburg. “And then you come along with a source that’s creating electromagnetic fields that weren’t intended to be in its environment.” Like a noisy engine in the background of an audio recording, radio-frequency interference is the result of a device “listening” for one signal at a specific frequency and “hearing” another. The 2.4-GHz microwave overpowers the 2.4-GHz router and the laptop gets ­confused.

For decades, the FCC has tried to prevent this. It issues regulations that cover both a device’s “noise”—unintended, useless emissions, like those from a shoddily shielded microwave—and its susceptibility to interference from other gadgets. “The people in the regulatory business produce ­standards for emissions and standards for immunity, or susceptibility, that should match, so that nothing emits more than anything else can tolerate,” says Brian Lawrence, executive director of the International Association for Radio, Telecommunications and Electromagnetics (iNARTE). “We know, however, that things go wrong.” Or to rephrase, things go bzzt-baba-bzzt-baba-bzzzzzzzt.

Radio-frequency interference occurs when the signal emitted by one device gets unintentionally picked up by another—creating audible noise or a compromised connection. Some interference is due to badly shielded wires or components, but some is just the result of too many gadgets crowded into a limited spectrum.

The explosion of complexity in electronic devices certainly hasn’t made things easier. “If somebody, perhaps even someone who’s fairly well-versed in the function of the device, opens a laptop computer to fix an RFI problem and doesn’t put it back together properly, or forgets a gasket or even one screw out of seven, it could degrade shielding,” says Shirish Shah, president of Compliant Electronics, an EMI (electromagnetic interference) testing firm. A laptop contains dozens of small emitters, the radiation and susceptibility of which must be accounted for.

Despite this complexity, Shah says, companies are responding with better devices and better compliance. The only exception? “When offshore companies try to reduce costs or cut corners.” Lawrence echoes the sentiment. “We have abdicated manufacturing responsibility to developing nations, where the expertise is not as well-established as it should be.”

But a mere explanation is cold comfort to the buzz-afflicted, and a thousand reasons aren’t worth a single solution. Unfortunately, life is tough for a DIY RFI warrior. The conventional wisdom about insulating from heat or sound doesn’t really apply to RFI shields. (For example, a thinner shield may be more effective than a thicker one, since its ability to attenuate is determined in part by the wavelength of the radiation.) Furthermore, a poorly designed shield could actually retune emissions to another frequency, replacing one type of interference with another. (In the case of dedicated RFI filters for power and phone connectors, as well as for radio and television antenna leads, each unit attenuates certain frequencies but not others.)

The enthusiast’s best weapon against RFI is the ability to adapt. If an older cordless phone is plagued with interference, it’s worth looking into a new handset. Modern wireless phones have moved from overcrowded frequencies, such as 2.4 GHz, shared with Wi-Fi routers and microwave ovens, to more peaceful pastures, most commonly by way of the Digital Enhanced Cordless Telecommunications (DECT) 6.0 standard. DECT operates at around 1.9 GHz, a frequency range far away from most common, noncommunications causes of interference, and uses cleverly controlled, minute frequency changes to avoid what little disturbance may crop up from cellphones and other DECT devices. Likewise, newer Wireless N routers are able to operate in another relatively quiet band of frequencies, near 5 GHz.

That’s not to say that buying new gear is the only option. As mentioned earlier, audio equipment can amplify noise from certain cellphones (iPhones are known for this, although other phones can cause problems as well). If your phone is buzzing through your speakers, you may be able to switch the frequencies the phone operates on, from 850 MHz (often labeled as EDGE) to higher, 3G frequencies. Changing this setting, which can be found in most phones’ configuration menus, can negatively affect data speeds and signal strength, but it’ll almost always kill that annoying buzz. Also, cheap ferrite beads can filter out RFI. These beads can be bought from electronics stores or cut from the weighted cylinders found on many cheap USB cables and then wrapped around the wires running from an audio source to the amplifier or, in rare cases, around the speaker wires themselves.

Placement also counts for a lot. Electromagnetic fields drop off quickly, so keeping a cellphone just 4 or 5 feet from vulnerable speakers or amplifiers will usually dull interference sounds beyond perception. A Wi-Fi-attacking microwave can be thwarted by keeping routers and wireless devices at least 10 to 15 feet away. If a CRT monitor or stereo amplifier gives you persistent trouble, check for less obvious, nearby emitters. Anything with an electric motor, such as an AC unit, can produce some nasty noise, but rarely do these fields reach very far. When it comes to RFI, a little distance can go a long way.

Published in News
Link to this article:

"Shielding is a mechanical fix for an electrical issue."